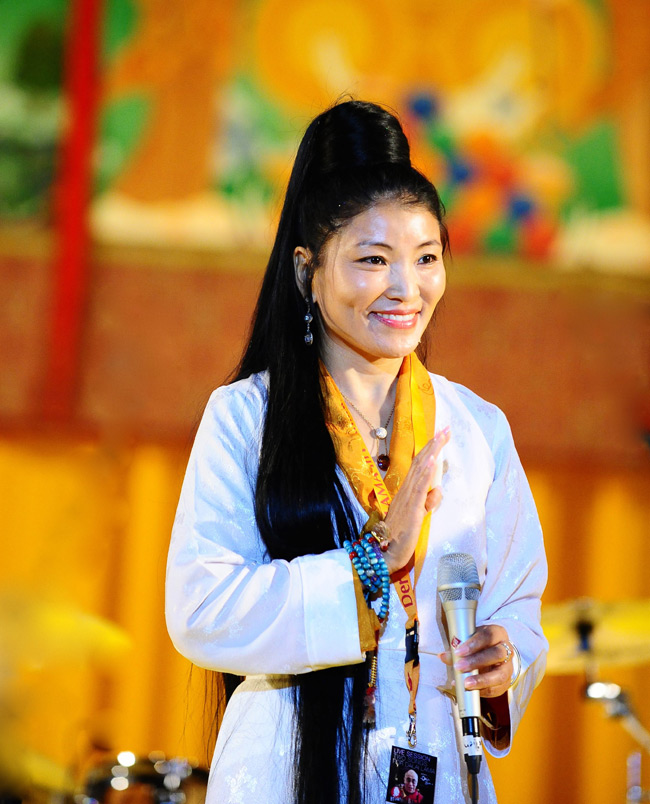 Since her pilgrimage on foot from her beloved homeland of Tibet, Yungchen Lhamo has emerged as the world’s leading Tibetan vocalist. Her haunting performances have enchanted audiences in more than 70 countries and have garnered critical praise worldwide. Her music has been described as “brilliant” (The New Yorker), “sublime” (Rolling Stone), and “spine-tingling” (The Times, London); she has been called “angel-voiced” (Newsweek) and praised for her “pristine, gliding vocal lines” (The New York Times).
Having recently returned from another extended pilgrimage, Yungchen is now back on the world stage, and audiences can revel in her music once again. Through her arresting songs–which explore Buddhist themes of spiritual pilgrimage, soul searching, and a delight in the natural environment as well as peace, forgiveness, and finding one’s own beliefs–she hopes to share Tibet’s rich cultural heritage and the innate grace and goodness of the Tibetan people with the rest of the world.

Following the 1995 release of her breakthrough album, Tibetan Prayer, which won the ARIA Award (Australia’s equivalent of the Grammy Award), Yungchen was signed to Peter Gabriel’s prestigious Real World Records label and has since released three albums: Tibet, Tibet (1996), Coming Home (1998), and Ama (2006).

While she is best known for her a cappella performances, Yungchen has also collaborated with luminaries such as Natalie Merchant, Philip Glass, Annie Lennox, Michael Stipe, Billy Corgan, Sheryl Crow, Jamshied Sharifi, Will Calhoun, and Michael Bearden, widely known as Michael Jackson’s musical director for the This Is It tour. Her songs have been featured on numerous compilation albums, on the soundtrack to film Seven Years in Tibet, and in a handful of documentaries.

In 2007, Yungchen collaborated with Tony Award-winning American dancer/choreographer Bill T. Jones and French percussionist Florent Jodelet for a sold-out performance piece titled ‘Walking the Line‘ at a section of Paris’s famed Louvre that had never before been used as a stage. Most recently, in Italy, Yungchen was gifted the city of Silanus’s esteemed “Funtana Elighe” journalism award and was recognized by the province of Genoa as a “Messenger of Peace” as well as given the title of “Ambassador of Culture.” Yungchen lives and makes music in America, where she is currently at work on her much-awaited fourth U.S. album from where she heads the Yungchen Lhamo Charitable Foundation www.yungchenlhamo.org which is a nonprofit organization dedicated to improving the welfare of Tibetans in need.