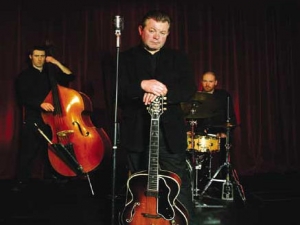 Trying to find a home for Nigel Mooney’s rich, luscious guitar licks and expressive vocals has always been a task that Mooney himself has claimed to be ‘beyond his remit’. For arguments sake, we take jazz and blues, we bandy about the words guitarist, vocalist and bandleader. We settle on Nigel Mooney – Irish jazz and blues man.

When he first grasped a guitar at the tender age of twelve, Mooney hadn’t even considered the social implications of musical genres, but he was damn sure that the guitar moves of Peter Green and Eric Clapton were far superior to the sounds of the more street-cred acts such as The Stranglers and The Sex Pistols. And so, braving the danger of a playground sanctioning for his offbeat musical bent, Mooney gathered a band of like-minded young souls and formed Addis Mopp, who turned out to be absolute legends in their own lunchtimes.

In ’76, Mooney brought his blues leanings to the aptly named prog-rock outfit Xanex Overchew, a band ahead of their time if only for the fact that the tranquilliser ‘Xanex’ had not been invented at that point and their ‘Xanex’ was merely a made up word that sounded cool. Leaving school, Mooney joined the family wholesale business, but he clung furiously to the blues beat and in ’84, having decided that a blues man has to face the music eventually, the day job was abandoned and the real work began. And so the The Gripewater Blues Band was formed. The group soon gathered a large and loyal following, spearheading the blues scene in Ireland and proving that your average white Dublin boy can hold his own when it comes to the blues. Mooney managed to barter a few gigs in J.J. Smyths on Dublin’s Aungier Street – a Friday night show in the upstairs room, nestled between the Tuesday night darts and the Saturday night disco. Such was the response from the hungry and often sidelined Irish blues fans, that J.J. himself realised the demand for Gripewater and pints was not to be ignored and so Friday night became blues night and to this day J.J. Smyths is synonymous with the cream of jazz and blues events.

The Gripewater Blues band fuelled the musical passions of a blues starved Irish audience and quickly established themselves as the leading local exponents of the genre, often augmenting the band with the great Irish saxophonist Richie Buckley and English sax supremo Don Weller. As testimony to their genuine talent, The Gripewater Blues Band were invited to play alongside many visiting dignitaries – warming up the crowds for B.B. King at his legendary National Stadium shows, sharing the stage with Dr. John, working with the great blues legends Lowell Fulson and Louisiana Red.

In 1994, the widely acclaimed Irish bandleader Earl Gill was on the look out for a new guitarist and invited Mooney to join with him. Gill was the beloved godfather of the Irish band scene and Mooney decided that the invitation might afford him the opportunity to broaden his horizons and expand his musical style. He stayed with Gill for just under two years before hitting out in ’96 with Justin Carroll on hammond organ and Myles Drennan on drums. With their trademark organ and guitar groove, they gave themselves the moniker Hammond Orgasm and became the house band for the Cork Jazz Festival club, a backstage pass that presented Mooney with the golden opportunity to jam with jazz greats such as Joey De Francesco, Russell Malone, Bill Mobley and Bobby Watson amongst numerous others.

It is the guitar that is Mooney’s first passion and his musical cohorts in this arena read like a Debretts Who’s Who of world renowned jazz guitarists – Mundell Lowe, Howard Alden and Ireland’s own Louis Stewart, the list goes on.

Mooney has a long and close association with many jazz and blues men, not least the charismatic pop legend, Georgie Fame. The friends have shared many a stage – be it Mooney on guitars for Georgie at Ronnie Scott’s or Georgie returning the favour at one of Mooney’s late night sessions in Dublin.