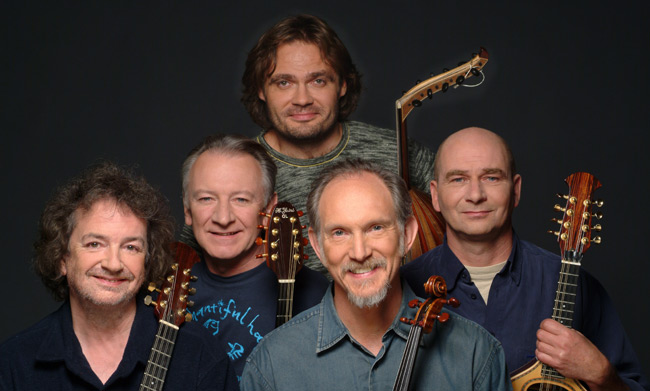 They keep the airlines in business!

Started by Andy 5 years ago, the band rehearsed for the first time in Australia and finished the tour that followed with a live recording at the Powerhouse, in Brisbane.  This album conveys the exciting sounds that the band creates on stage.

Since then the band has played at many of the world’s major festivals and concert halls in Australia, Japan, USA, Ireland, Italy and the UK.  (Vicar Street, National Concert Hall, Cork Opera House notably).

The music is a fiery fusion of Irish, Balkan, and American Old Time music.  Each member of the band has recorded extensively during their musical careers – Nikola solo and with numerous Balkan bands in Hungary; Bruce with solo albums and collaborations with Pete Seeger, Martin Hayes, Bill Frisell and many others; Dónal with bands ranging from Planxty and The Bothy Band to Moving Hearts, and more than 100 albums that he has produced and played on for other artists; Andy with Sweeney’s Men, Planxty and Patrick Street, solo and with Paul Brady; Rens has also recorded with Andy, and many Dutch bands like Wolverlei and Fungus.

Between them the band plays over 20 instruments with Nikola covering a bewildering range of East European instruments that many people will never have seen before.  Even Mozaik’s new studio album “Changing Trains” was recorded and mixed in four different countries!  It brings this unique combination of musical genres to a new high.

“This was glorious music that raised spirits, roofs and not a few pulses along the way.

Yet another magnificent musical detour that unleashed our imaginations and our energies, free to roam where passports and language barriers hold no sway.”