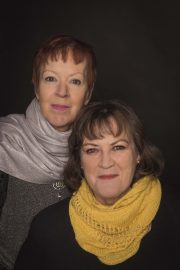 Sisters Maighread and Tríona Ní Dhomhnaill belong to a renowned singing family originally from the Donegal Gaeltacht. The unique style and repertoire of traditional singing they represent so gloriously, comes down to them through generations of the Ó Domhnaill family. Added to this is their distinctive unison and harmonic interpretations of Donegal songs and their fluent and accomplished singing to instrumental accompaniment.

Tríona (who was a member of one of the most influential groups in contemporary Irish traditional music, The Bothy Band) is a skilled keyboard player of piano, clavinet and harpsichord and also a composer and arranger of traditional material. With their brother, the late Mícheál, a fine singer and instrumental player, they formed the seminal traditional group, Skara Brae in the late 1960s. It was through this group and its one recording, now a classic, that the regional songs of their native Donegal were introduced to a wide audience both in Ireland and abroad.

In 1999, the two sisters recorded the album Idir an Dá Sholas with Donal Lunny. A few years later they combined their talents with two other Donegal women Moya Brennan (of Clannad) and Mairéad Ní Mhaonaigh (of Altan) to make an album under the title T with the Maggies.

Maighread and Tríona Ní Dhomhnaill are touring as a duo. Their live performances are unforgettable heart-rending events. The sound of their solo and combined voices is indescribable but lingers in the memory forever.