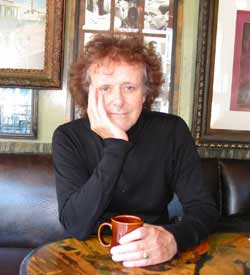 Donovan Leitch was born near Glasgow, but moved down to St. Albans as a child. He was ‘discovered’ by his managers-to-be on the South coast folk scene in 1964. He came to national prominence in March 1965 when his first single, “Catch The Wind” charted in the wake of a three-week residency on TV’s “Ready Steady Go!”. An equally successful second single, “Colours”, an album, and the “Universal Soldier” EP put the 18-year-old singer squarely in the folk camp, an image that was re-enforced by peaked cap, denims, and motto-bearing acoustic guitar.

In late 1965, Donovan hooked up with manager Allen Klein and a new producer, Mickie Most (who also worked with the Animals, Herman’s Hermits, and Lulu), who steered the young singer away from acoustic folk and into psychedelic pop.

Some critics suggested that the early Donovan was just a poor imitation of Dylan, but his second album, “Fairy-tale”, saw him in transition to a more distinctive style. Alongside further folk offerings were meditative pastoral songs like “Jersey Thursday” and the jazz-influenced “Sunny Goodge Street”.

That was to be Donovan’s last U.K. release for nearly fourteen months. Legal and managerial problems were to blame and the situation was exacerbated by his decision to work with Mickie Most, an independent producer whose work was generally licensed to EMI in Britain, not Donovan’s label, Pye. But in the States the hassles were ironed out by the spring of 1966 and the first collaboration with Most, “Sunshine Superman” was released there in the summer. At home, the negotiations dragged on and the single did not appear until the end of the year.

The period between 1966 and 1969 was to produce Donovan’s most original and enduring body of work. For early sessions, he was sometimes assisted by John Cameron, whose tasteful arrangements avoided the excesses of many contemporary musical directors. Further input came from top sessionmen like Jimmy Page and John Paul Jones, as well as seasoned jazz and folk players like flautist Harold McNair and bassist Danny Thompson. Drawing inspiration from jazz, blues and the traditional music of the British Isles – and generally featuring the guitar-dominated sound typical of the era – Donovan created music that put him at the forefront of the rock scene for a heady couple of years.

“Sunshine Superman” was one of the earliest, and finest, examples of psychedelic pop, and there were plenty of songs of equal worth on the U.S. album of the same title. His next U.S. album, “Mellow Yellow”, (containing a Paul McCartney cameo), saw Donovan incorporating vaudeville and more overt jazz elements, as well as simplifying his lyrical approach and reaffirming his enthusiasm for all things pastoral. But because of the delay in the release of the “Sunshine Superman” single in the U.K., these two albums were condensed into one set for the home market, and several U.S. singles went unreleased there.

Donovan’s next album, “A Gift From A Flower To A Garden”, was released virtually simultaneously on both sides of the Atlantic. This lavish boxed double album marked a further simplification in Donovan’s approach and it epitomised that brief period of love, peace and naivety often referred to as ‘flower power’. Donovan had flung himself into the spirit of the times with such enthusiasm that he was disadvantaged when the competition moved towards a more progressive style of rock at odds with the singles chart.

Adopting a heavier approach, the “Hurdy Gurdy Man”, featuring Jeff Beck on guitar, found Donovan harking back temporarily to the psych sound of the “Sunshine Superman” album. Subsequent singles like “Atlantis” and “Barabajagal” placed him in the rock mainstream, rather than at its cutting edge.

Donovan and Most parted company in 1969, and though the singer was able to sustain his albums success into the early Seventies, the hit singles had dried up. A reunion with Most on the album,”Cosmic Wheels” gave Donovan his last commercial success on an international scale.

After a while though, his full-length efforts began to sound unduly repetitive and overly florid. By the end of the Sixties, Donovan had begun to fade and struggle for relevancy.

Around 1970, he had achieved everything he could have possibly dreamed of. There was nowhere else to go. Donovan walked onto a BA jet in Tokyo and out of a tax plan called a “drop-out year” where he was going to earn millions. It had ended. He came home to his cottage in England, married Linda Lawrence, his great love and teenage muse, and walked away from fame, the Rolls Royce, and the mansion.

They went to Joshua Tree in the California desert for much of the ’70s and brought up the children as an alternative family. In ’83, he stopped making records completely.

By 1990, Donovan had gone into the studio again and started recording ideas. Producer Rick Rubin had been working with Tom Petty, who was playing one of Donovan’s songs. Rick said, “I’ve always wanted to record Donovan.” Petty said, “Why don’t you phone him up?” So he did. The result was a new album, released in 1996, called “Sutras” and a world wide tour.

January, 2004 saw the release of another album called “1964”, which features recordings of Donovan from that year, made before his string of hit records. The collection shows his early guitar work and command of folk-blues traditions, including originals written and recorded by the age of eighteen. A new studio album called “Beat Café” was also in the works for mid summer of ’04. In 2005, Donovan was still touring the United States.

In a way, Donovan embodied his era, his best work matches any British music of the mid-Sixties. Certainly he wasn’t as deep as Dylan, but the acoustic tracks he recorded in the mid-’60s, were affecting, thoughtful, and tuneful, especially considering he was still in his teens at the time.